Category: In the news

In In the news, Nice

We love the city of Nice with its great combination of culture, weather and seaside and we were positively surprised to see that many others agree. According to Atout France – an agency promoting tourism in France – Nice is the favorite destination for foreign tourists in the country (outside of Paris, which is of course in a league of its own). 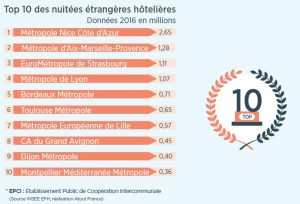 Based on a study of hotel occupancy at 2’700 hotels in 30 French cities, foreign tourists booked stays for a total of 2.65 million hotel nights in Nice in 2016. Marseille and Strasbourg come in second and third in the ranking with 1.3m and 1.1m nights booked. Foreign travelers represent almost 30% of the demand, while locals make up the remainder. The data also shows that foreigners have come in smaller numbers in 2016 than in the previous year (-2%), while French tourists traveled more (+5%).

The nationality split shows the British nationals were the largest visitor group at 2 m nights, followed by the Germans at 1.5m and the Americans at 1.1 million. Note that these numbers represent the total number of nights spent in the 30 cities, while the number of actual visitors will be lower as on average these visitors booked stays of 1.8 nights (ie almost two days). 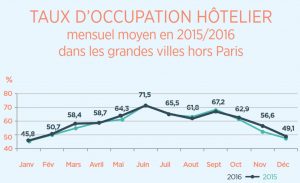 What is not surprising is the seasonality visible in the data, given that most tourists prefer to come here during the warm summer months. Peak summer seasonality is over 20 percentage points higher than occupancy in the winter. Although not covered by this study, hotel room pricing follows a similar path with prices in the summer 60%-100% higher than during the low season.